I’ve just come back from two weeks in Spain. We flew to Barcelona and then drove up the coast staying in four different places – a campsite in Tossa de Mar, an apartment in Sa Tuna, a little villa in the middle of nowhere near Cistella and then finally a hotel in Sitges. It was amazing! So many different things to see, beautiful beaches, boiling weather and the most incredible food – from plates of mouthwatering tapas to fish flame-grilled moments after being caught.

But wow…a holiday with a one and a half year old! Times have definitely changed. Ridiculously (in retrospect) I took four books with me and only read half of one. I know now that I should have used my easyJet luggage allowance for toys rather than reading material.

I’ll admit that I’m used to holidays lying on my towel in the sand reading, maybe having a swim and then perhaps a little snooze followed by a coffee or a cold beer. This did not happen on this holiday! Yet the thing was, once I finally accepted that this type of holiday was to be shelved for a few years at least, I realised that the beach had so much more to offer! I’d forgotten how satisfying it is to make a sandcastle (even if it’s pushed to the ground a moment later), to dig a hole and watch it fill with water, to find shells and sea-glass, hear pebbles plop into the water, splash in puddles left by the sea and sit wrapped in towels after swimming eating cheese and ham sandwiches and sandy crisps.

And there’s nowhere better to be with a babe than Spain! They love them! It was so nice. And there’s a playground on every corner so it’s a toddler’s paradise. 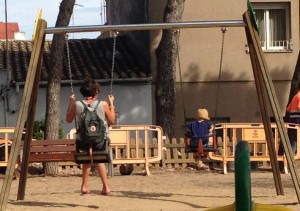 So while holidays may have changed for a while (and coming home is actually quite a relief!) I am a bucket and spade convert. What I have sacrificed in books I have more than made up for with sand castles, ice creams, chasing butterflies, swings and seesaws and Peppa Pig stickers.

There’s nothing like sticky little ice-cream hands covered in sand and suntan lotion! Bring on the next holiday I say 😉

Jenny Oliver wrote her first book on holiday when she was ten years old. Illustrated with cut-out supermodels from her sister's Vogue, it was an epic, sweeping love story not so loosely based Dynasty. Since then Jenny has gone on to get an English degree and a job in publishing that's taught her what it takes to write a novel (without the help of the supermodels). She wrote her first book The Parisian Christmas Bake Off on the beach in a notebook that would end up covered in sand each afternoon and damp from the sea. Nowadays her inspiration comes from her love of all things vintage, a fascination with other people’s relationships and an unwavering belief in happy ever after! Jenny's latest title, The Sunshine and Biscotti Club, set in sunny Tuscany, is your perfect holiday reading! Follow her on Twitter @JenOliverBooks View more posts