The Hotel Limoncello, owned by Libby and venue for The Sunshine and Biscotti Club, stands alongside the tranquil blue waters of a stunning Italian lake. Fringed with lemon groves and pine trees, it’s picture perfect and the best place to cool off when the sun gets that little bit too hot.

The inspiration behind it? Well, I have a bit of a love affair with lakes and rivers.

Much of my youth was spent in a rowing boat – going up and down the Thames in the freezing cold early morning. But as I got older, and better at rowing, I went further afield to the winding river of sunny Seville in Spain; a swimming pool turquoise lake in Munich, Germany; the deep, icy mist-laden waters of Switzerland and the picturesque beauty spots of France, Austria and Italy. When we raced in Italy, in the sharp blue water of the mountains, a lake surrounded with tiny villages perched precariously as if they might slip, it was so hot that we would dunk our caps and t-shirts in the lake before we went out for a paddle, water pouring down our arms and legs just to keep cool. 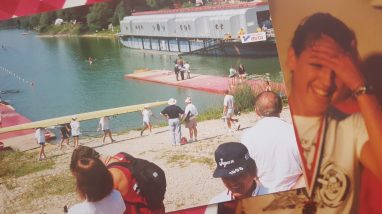 These lakes and rivers made a map of Europe for me. The towns I never saw, just the water. And now, years later, when I go on holiday, I drag us to a lake nearby – that I once saw only through a mirage of pre-race nerves or the endless laps of a training camp – and see it afresh, with eyes no longer focused only on the boat but instead the trees and the beaches and the cafes.

Last year we went to the lake in The Sunshine and Biscotti Club. Once one of the regatta lakes in my past. Now a tranquil sea of blue so clear we could spot the fish swimming. White ducks drifted past through air made wobbly from heat. There was music from a cool, hipster café that served hot dogs and beer in condensation covered glasses. We swam in water that was flat and calm and strangely heavy without the buoyant salt of the sea. 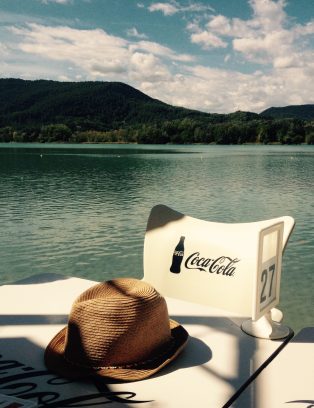 This time there were no megaphones, no starter guns, no crippling nerves and wild adrenaline. No oars, no racing kit, no spectator stands, no medals. Just the gentle lapping of waves on pebbles, the splash of a dive, the quack of a duck and the thump of the hipster beats.

This is the lake that I dream about when it’s wet and cold and raining in England. This is the lake in The Sunshine and Biscotti Club that forms the backdrop to the lives of Libby, Eve and Jessica as they reignite wary friendships, renovate the dilapidated Hotel Limoncello, dust off forgotten baking skills, and, in the warmth of the sun and under a canopy of lemon trees, re-evaluate what they have, what they had and what they need for a future that is stronger than their pasts.

Quick run to your local bookshop or supermarket to buy a copy or straight to your phone, Kindle or Kobo ereader to download! 😉

Jenny Oliver wrote her first book on holiday when she was ten years old. Illustrated with cut-out supermodels from her sister's Vogue, it was an epic, sweeping love story not so loosely based Dynasty. Since then Jenny has gone on to get an English degree and a job in publishing that's taught her what it takes to write a novel (without the help of the supermodels). She wrote her first book The Parisian Christmas Bake Off on the beach in a notebook that would end up covered in sand each afternoon and damp from the sea. Nowadays her inspiration comes from her love of all things vintage, a fascination with other people’s relationships and an unwavering belief in happy ever after! Jenny's latest title, The Sunshine and Biscotti Club, set in sunny Tuscany, is your perfect holiday reading! Follow her on Twitter @JenOliverBooks View all posts by jennyoliverbooks

New Year Lights at Mousehole 😻
New Year swim in front of St Michael’s Mount 🥶
In ❤️ with my new lobster Xmas Dec from @thecollecterie
Love reading? Love Christmas? Sign up to the Jenny Oliver newsletter by Nov 30th and you'll get a FREE Xmas short story! 🎄