For the last few months I’ve been lost in a book bubble. Every spare working hour has been spent writing. And while I love it, when it gets difficult I tend to fantasise about what I’ll do when the book is done and the bubble bursts and I’m freeeeee! This time I’ve been obsessing about decluttering. It started when I read an article about Marie Kondo and her book The Life-Changing Magic of Tidying Up: The Japanese Art of Decluttering and Organising. 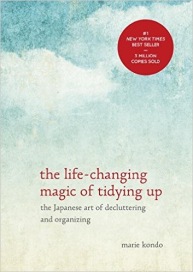 Kondo’s mantra of only keeping things that bring you joy and her technique of folding clothes has lit a little fire of obsession in my brain. So when I was stuck on a particularly tricky part of my book revisions I took a break and refolded everything in my drawers. I was a folding demon! And am now an upright fold and stacker – my clothes are arranged like a filing cabinet. It’s life altering… Why did I not do this earlier? You can see everything (I found tops I’d forgotten I owned), you can fit more in so you don’t have to ram it all down to shut the drawer and nothing really gets creased. I’m a folding Konvert. 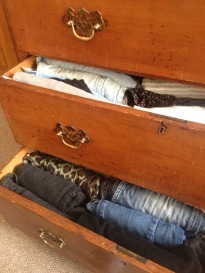 So next up is the rest of the flat. Not the folding but the bringing of joy bit. Room by room everything is going to have to prove its worth. I’m particularly looking forward to the storage cupboard which has become one of those places to shove something with half closed eyes and hope everything else doesn’t collapse on top of you. It most certainly doesn’t bring me joy. I can sense the stuff in there quaking in its boots, praying the book never gets finished.

My clutter shouldn’t worry too much though, I’m pretty sure that as soon as the book is done, and I have the time to do it, decluttering will hold much less appeal!

Jenny Oliver wrote her first book on holiday when she was ten years old. Illustrated with cut-out supermodels from her sister's Vogue, it was an epic, sweeping love story not so loosely based Dynasty. Since then Jenny has gone on to get an English degree and a job in publishing that's taught her what it takes to write a novel (without the help of the supermodels). She wrote her first book The Parisian Christmas Bake Off on the beach in a notebook that would end up covered in sand each afternoon and damp from the sea. Nowadays her inspiration comes from her love of all things vintage, a fascination with other people’s relationships and an unwavering belief in happy ever after! Jenny's latest title, The Sunshine and Biscotti Club, set in sunny Tuscany, is your perfect holiday reading! Follow her on Twitter @JenOliverBooks View all posts by jennyoliverbooks

Chelsea High came out mid pandemic when the shops were shut and the schools closed. It’s SO nice to see it reaching readers now and getting feedback from kids who love it.
A French and American theme to the car boot this morning
Perfect #cornwall
So thrilled that Chelsea High is one of 11 books on the shortlist for Lancashire Book of the Year 2021!(As chosen by students around Lancashire) #LBOY2021